In support of the AUSSIE AUTHOR READING CHALLENGE I’m hosting in 2010 (sign-up here, we’ve just reached 20 participants) I will be posting a series of articles highlighting great Aussie Authors and their books you may be interested in. Today I’m putting the spotlight on GERALDINE BROOKS.

Australian-born Geraldine Brooks is an author and journalist who grew up in the Western suburbs of Sydney. She worked as a reporter for The Sydney Morning Herald for three years as a feature writer with a special interest in environmental issues. In 1982 she won the Greg Shackleton Australian News Correspondents scholarship to the journalism master’s program at Columbia University in New York City. Later she worked for The Wall Street Journal, where she covered crises in the the Middle East, Africa, and the Balkans.

In 1994 her first book (non-fiction), Nine Parts of Desire: The Hidden World of Islamic Women was published. 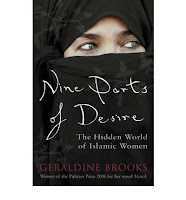 When her poised and sophisticated yuppie assistant at the Cairo bureau of the “Wall Street Journal” suddenly ‘adopted the uniform of a Muslim fundamentalist’, Geraldine Brooks set out to discover the truth about women and Islam. Sometimes adopting a chador as camouflage, she was granted meetings (and often astonishingly intimate insights) by everyone from Queen Noor of Jordan to former Iranian President Rafsanjani’s daughter. She met with Palestinians protesting about ‘honour killings’ for adultery and sheltered girls transformed into warriors by the Emirates’ armed forces. Throughout the Middle East, Brooks was invited into the homes and lives of these women where she found real stories that overturn western stereotypes. Fair-minded and often revelatory, “Nine Parts of Desire” is an extraordinarily rich tapestry of the different lives women lead under Islam, and a captivating and diverse portrait of a little known world. 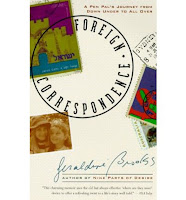 In 1995 she wrote a memoir, Foreign Correspondence, which chronicles a childhood enriched by penpals from around the world, and her adult quest to find them.

Noteworthing event in her career as a journalist : While in Nigeria to report on Shell Oil’s collusion with the Abacha military dictatorship, Brooks was arrested and thrown in a lock up in Port Harcourt, accused of being a spy.

Geraldine Brook’s first novel, Year of Wonders was published in 2001. 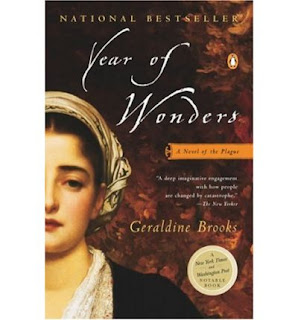 This gripping historical novel is based on the true story of Eyam, the “Plague Village,” tucked in the rugged mountain spine of England. In 1666, when an infected bolt of cloth carries plague from London to the isolated settlement of shepherds and lead miners, a housemaid named Anna Frith emerges as an unlikely heroine and healer. Through Anna’s eyes the reader follows the story of the plague year, as her fellow villagers make an extraordinary choice: convinced by a visionary young minister they elect to quarantine themselves within the village boundaries to arrest the spread of the disease. As the death toll rises and people turn from prayers and herbal cures to sorcery and murderous witch-hunting, Anna must confront the deaths of family, the disintegration of her community, and the lure of illicit love.

Exploring love and learning, fear and fanaticism, and the struggle of science and religion to interpret the world at the cusp of the modern era, Year of Wonders is at once a story of unconventional love and a richly detailed evocation of a riveting moment in history. Like Arthur Golden’s Memoirs of a Geisha and A. S. Byatt’s Possession, Year of Wonders blends learning and romance into an unforgettable read.

Praise for ‘Year of Wonders’ : “Brooks proves a gifted storyteller as she subtly reveals how ignorance, hatred and mistrust can be as deadly as any virus. . . . Year of Wonders is itself a wonder.” (People )

I myself read ‘Year of Wonders’ quite a few years ago now but the story and characters remain vivid in my memory to this day – very moving, highly recommended. 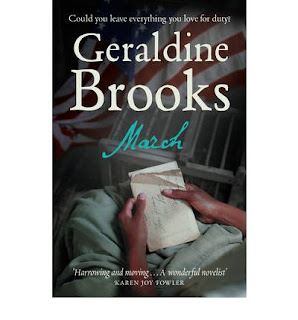 Brook’s second novel, March, a retelling of Louisa May Alcott’s classic Little Women from the point of view of Mr. March, the absent father, won the Pulitzer prize for Fiction in 2006. This is a historical novel and love story set during a time of catastrophe on the front lines of the American Civil War.

A reader’s guide and author interview about this novel are available at the author’s website.

Praise for ‘March’: “Inspired… A disturbing, supple, and deeply satisfying story, put together with craft and care and imagery worthy of a poet.” – The Cleveland Plain Dealer

* At the time of writing, The Book Depository, has 31% off the normal price for this title, along with their usual free delivery worldwide. 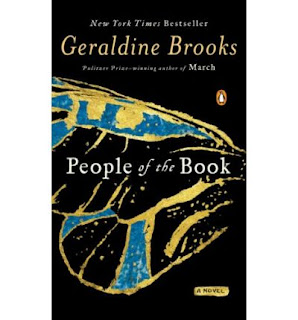 Brooks’ most recent novel, People of the Book, has been translated into more than 20 languages and was an instant New York Times bestseller.

The complex and moving novel by Pulitzer Prize winner Geraldine Brooks follows a rare manuscript through centuries of exile and war. Inspired by a true story, “People of the Book” is a novel of sweeping historical grandeur and intimate emotional intensity by an acclaimed and beloved author. Called a tour de force by the “San Francisco Chronicle,” this ambitious, electrifying work traces the harrowing journey of the famed Sarajevo Haggadah, a beautifully illuminated Hebrew manuscript created in fifteenth-century Spain. When it falls to Hanna Heath, an Australian rare-book expert, to conserve this priceless work, the series of tiny artifacts she discovers in its ancient binding – an insect wing fragment, wine stains, salt crystals, a white hair, only begin to unlock its deep mysteries and unexpectedly plunges Hanna into the intrigues of fine art forgers and ultra-nationalist fanatics.

Brooks, her husband Tony Horwitz (also a Pulitzer prize winner) and their two sons divide their time between homes in Martha’s Vineyard, Massachusetts, and Sydney, Australia.

A selection of reviews of Geraldine Brooks’ titles by other book bloggers:
Year of Wonders – Everything Distils Into Reading
March – Just One More Page…
People of the Book – Drey’s Library