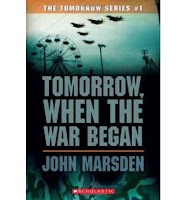 In support of the AUSSIE AUTHOR READING CHALLENGE I’m hosting in 2010 I will be posting a series of articles highlighting great Aussie Authors and their books you may be interested in. This week I’m putting the spotlight on JOHN MARSDEN.

John Marsden, born in Victoria, Australia in 1950 is best known for his Young Adult fiction series Tomorrow and its follow-up, The Ellie Chronicles.

John attended many different primary schools and from an early age enjoyed the journeys into magical worlds that reading could provide. After graduating high school he began a law degree at the University of Sydney but soon decided a career in law would be ‘too boring’. He then drifted around for ten years trying different jobs, before begininng a teaching course (which he loved) at the age of 28, and then embarked on a teaching. While teaching, in 1987 he succeeded in getting his first book So Much to Tell You

and Letters from the Inside

Praise for Out Of Time

: “In this…intriguing novella by Australian fantasist Marsden by way of H.G. Wells, the time machine isn’t just a thrilling gizmo but a vehicle for exploring the human condition….Sophisticated YAs will enjoy chasing its elusive ripples of meaning.”– Booklist

In 1993 the widely acclaimed Tomorrow, When the War Began (The Tomorrow Series #1)

When Ellie and her friends go camping, they have no idea they’re leaving their old lives behind forever. Despite a less-than-tragic food shortage and a secret crush or two, everything goes as planned. But a week later, they return home to find their houses empty and their pets starving. Something has gone wrong–horribly wrong. Before long, they realize the country has been invaded, and the entire town has been captured–including their families and all their friends. Ellie and the other survivors face an impossible decision: They can flee for the mountains or surrender. Or they can fight.

A Killing Frost (The Tomorrow Series #3)

Darkness Be My Friend (The Tomorrow Series #4)

Burning for Revenge (The Tomorrow Series #5)

The Night is for Hunting (The Tomorrow Series #6)

The Other Side of Dawn (The Tomorrow Series #7)

Wikipedia provides detailed summaries of each of the books in the Tomorrow Series.

was then published from 2003 to 2006. This follow up series concerns with the attempts of society and the protagonist Ellie to regain a normal level of functioning in the face of the psychological damage sustained during the war.

Wikipedia provides detailed summaries of each of the books in the Ellie Chronicles. 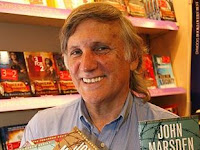 ‘Tomorrow, When The War Began’ and its subsequent sequels are one of the most popular and critically-acclaimed series of novels aimed at young readers in Australian literature history. It has sold between 2 and 3 million copies in Australia alone and has been translated into five languages, one of them being Swedish, where the series has sold over 115,000 copies.

The Tomorrow Series is also being made into a movie by Stuart Beattie (screenwriter of Australia and Pirates of the Caribbean trilogy).

Read a transcript of an interview with John Marsden by Andrew Denton in 2004.
In 2006, John started his own school Candlebark (P-8) set in natural bushland north of Melbourne, Australia.

John Marsden’s most recent work of fiction is a contemporary retelling of Hamlet (2008).

Something is rotten in the state of Denmark, but Hamlet can’t be sure what’s causing the stench. His rage at his mother’s infidelities — together with his greed for the sensual Ophelia and his dead father’s call to revenge a “murder most foul” — have his mind in chaos, and he wants to scatter his traitorous uncle’s insides across the fields. But was it really his father’s ghost that night on the ramparts, or a hell-fiend sent to trick him? “Action is hot,” he tells Ophelia, who lives shut up in a tower with her longings and lust. “Action is courage, and reflection is cowardly. Picking up the knife has the colors of truth. As soon as I hesitate. . . .” In this dark, erotically charged, beautifully crafted novel, John Marsden brings one of Shakespeare’s most riveting characters to full-blooded life in a narrative of intense psychological complexity.

Here is my review of Hamlet.

A selection of reviews of John Marsden’s titles by other book bloggers:

Hamlet – Terra on the Bookshelf