Do you like diagrams and maps in fictional works? 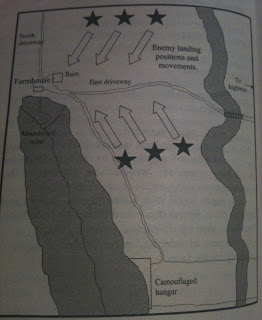 At the moment I am reading Matthew Reilly’s The Six Sacred Stones and he uses lots of maps and diagrams. I like pictorial reference points in novels but I know others absolutely detest it.

Some say the diagrams of his settings are childishly simplistic and hence patronising to the reader.

I enjoy having little maps and pictures to refer to. It aligns with the way my mind works and absorbs information (but I am mathematically trained so that’s not a surprise I suppose).

Others say it’s a poor reflection on his communication through prose that diagrams are even needed.

I’m in the camp that says it’s not that Reilly does a bad job conveying the setting (on the contrary), it’s just that the diagrams help readers quickly follow the flow of the sometimes complex action sequences.

Let’s be frank, Reilly does not claim to be a second Tolstoy. His focus is on the story telling, and the stories he tells are escapist ones.

Reilly says he often uses the diagrams and lists for twist, and it is crucial to him that they are formatted correctly. On his website Matthew Reilly explains his use of diagrams:

I do them myself. I also deliberately try not to make them too detailed. They are there only as a reading aid. I absolutely do not want to take the ‘imagining’ of the book from the reader. I want readers to picture Wilkes Ice Station or Area 7 for themselves, I just try to help them out with the basic layout.

That said, I am most proud of the diagrams in Area 7. So far as I know, they are the only diagrams in a novel that ‘evolved’ with the story – as the underground facility floods, the diagram changes with it! Although Reilly’s use of pictures is very pronounced, fictional works that are considered much less contemporary/commercial, literature even, make use of diagrams.

How much poorer would the reader’s experience be without a family tree diagram to refer to in Gabriel Garcia Marquez’s One Hundred Years of Solitude? I know I found it invaluable.

In my opinion diagrams are simply another form of communication (another language) that when used in the right setting and appropriate frequency can really enhance the message being conveyed.

After all, the ultimate objective is to convey a message in the most effective manner possible is it not? Note I said effective, not efficient. :)

What do you think?
Are you a map geek like me?
OR
Do you think fictional authors should stick to words and leave the maps to Google?