The Long Drop is a stand-alone true-crime thriller from the acclaimed author of the Alex Morrow novels, Denise Mina, that I highly recommend in audio. 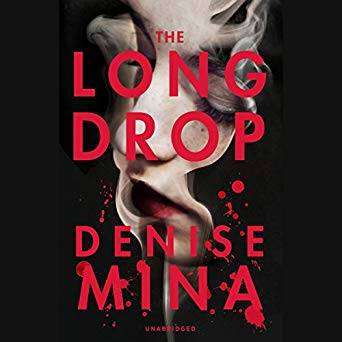 William Watt is an ordinary businessman, a fool, a social climber.

Peter Manuel is a famous liar, a rapist, a criminal. He claims he can get hold of the gun used to murder Watt’s family.

One December night in 1957, Watt meets Manuel in a Glasgow bar to find out what he knows.

Based on true events, The Long Drop is an extraordinarily unsettling, evocative and compelling novel from a writer at the height of her powers.

The Long Drop is one of the most riveting audiobooks I have listened to in quite some time. The shocking nature of the criminal acts, the catalyst for the investigation, are disclosed very early on. The real subject of this novel is the psychology of the web of individuals involved, Glasgow’s criminal underbelly and societal attitudes in the 1950s.

Dowdall smiled. You may have been in prison, Bill, but you don’t know these people, not really. Dowdall became almost tearful. Some of these people, he said, they’re not even trying to be bad. They just are bad, everything they do is bad, and if it doesn’t start bad with them, they’ll turn it bad. Watt is a man of the world and said so but Dowdall smiled gently and told him, Bill, some of these men don’t seem to be of this world. These people are stained, their very souls are tainted. Then he patted Watt’s hand as if he regretted having to tell a child these dreadful things.

In dare I say it, humanising those involved through the detailed depiction of conversations in The Long Drop, Mina offers readers chilling insights into the criminal mind — the gameplay, the strategy, their motivations, emotional ignorance and sheer depravity.

The way she has broken down the myriad elements and chosen to recount them from various character viewpoints (largely present-tense) alternating between historical flashbacks and the drama and spectacle of the eventual criminal trial, is impressive.

Narrator David Monteath’s nuanced differentiation between character accents and phrasing adds to the experience – a well-paced and objective delivery of deeply unsettling subject matter. < Listen to an audio sample >

What I most admired is how Mina’s lyrical prose brought the events to life, from the cat-and-mouse criminal and predator-prey dynamic to the tension and theatre of the court.

Dowdall knows that they will have been warned that they will be made to leave if they don’t keep quiet. On the balcony, a woman is having a coughing fit, she sounds like a heavy smoker and struggles to shift the sticky mucus. Everyone is aware that she will be put out if she can’t stop. As Dowdall takes a step into the court, her staccato cough machine guns over his head. He takes another step, glad of the covering fire. He is halfway across the room when her smokers cough snaps and she closes her throat. The room drops its shoulders.

Mina never preaches, yet displays beyond doubt the devil is in the details. There are levels of bad behaviour society harbours and condones, and then there is evil — their definition and the metering of justice, a fickle beast.

Denise Mina’s The Long Drop is an unnerving study of detail and psychology, a fiction of power and poignancy based on fact. However, it’s a book I’d recommend only to those who revel in detail and have a strong stomach.

Get your copy of The Long Drop from:

Related Reads:
In The Morning I’ll Be Gone by Adrian McKinty  /  The Wife and The Widow by Christian White  /  To The Lions by Holly Watt  /  The Twentieth Man by Tony Jones  /  Just by Jenny Morton Potts

About the Author, Denise Mina

Denise Mina is the author of the novels Blood, Salt, Water, The Red Road, Gods and Beasts, The End of the Wasp Season, Still Midnight, Slip of the Knife, The Dead Hour, Field of Blood, Deception, and the Garnethill trilogy, the first instalment of which won her the John Creasey Memorial Award for best first crime novel. Mina has twice received the Theakston’s Old Peculiar Crime Novel of the Year Award. She lives in Glasgow.