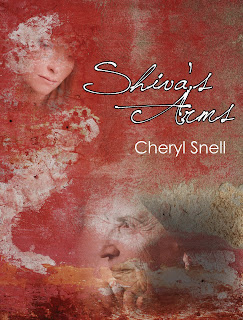 BOOK SYNOPSIS: Is there a happy medium between Hindu tradition and American style, or does the battle of wills between a mother and daughter-in-law for the love of the man caught in the middle trump all else? Shiva’s Arms evolves into an exploration of cultural identity, the power of reconciliation, and the meaning of home.

BOOK REVIEW: Compelling. While Shiva’s Arms is a story steeped in culture clash, at its heart it is a universal story about the power of family.

“When the Sambashivans ordered the unsuitable bride and family black sheep back to India, the couple had to obey, tumbling from their brass bed on the appointed morning to dress in love beads, batik, and peace sign jewelry.”

The unsuitable bride is a blonde American named Alice and the family black sheep her Indian husband who’s made a life for himself in America, Ramesh Sambashivan. Cheryl Snell tells the story of these characters in third person, as they find themselves enveloped in a storm of cultural identity dilemmas and familial obligations. The epicentre of this storm is the family matriarch, or ‘Amma’ whose name is Shiva, all-seeing and all-powerful like her namesake. Just like the colonial powers, this feisty old lady does not let international borders hamper her rule.

At less than 200 pages, this novel’s narrative covers a lot of ground moving at a cracking pace and Snell’s powerful use of symbolism draws the reader into the character’s world reminiscent of the way Alice in Wonderland fell in the rabbit hole. Snell explores the both the helplessness one can feel in the face of oppressive cultural norms and the supportive power and nurturing qualities of that culture. Intriguing and heartening for me is the illustration that at the heart of a seemingly patriarchal culture, the enduring power resides in the role of the mother. This is a story of strong women, with strength displayed in many forms – intelligence, independence and sheer determination.

I learned a lot about Indian and particularly Brahmin culture through reading this novel and my perspective on the subject matter has broadened considerably. We can all learn something from this novel, no matter what our race or creed – that is the enduring power of family.

The Author: While this debut novel from Cheryl Snell is not auto-biographical, the author did draw on her personal experiences of marrying into the Hindu Brahmin culture. Prior to the publication of Shiva’s Arms, Snell has written five collections of poetry, Flower Half Blown, Eptihalamion, Samsara, Multiverse and Prisoner’s Dilemma (inspired by game theory).

Welcome to Cheryl. Thank you for the opportunity to read and review Shiva’s Arms. I enjoyed it immensely and feel I also learnt something from the reading experience.

Before reading Shiva’s Arms I had assumed the subject matter would lend itself most to a female audience. I was surprised to find there was something in there for female and male, young and old. Did you write Shiva’s Arms with a particular audience in mind?

I never write with an audience in mind. I find it hobbles my progress into the story. There are false starts, and it takes a steely attitude to ‘kill your darlings’ in order to find the work’s true voice.

Shiva’s Arms is a story that has meaning and message on multiple levels. At what level did you first form your story – broad symbolism or character/plot driven?

The elements all work in tandem, shifting and slippery as they might be.When I wanted to explore the stage of life called sanyasi, when a person “goes into the forest” and renounces the world in preparation for death (and his next birth), I needed a metaphor to underscore that. I thought the ache that underscores an act of immigration would be a good match. And I needed people to dramatize these themes, so the Sambashivan family was scribbled into being. It’s a juggling act sometimes.

How long did you spend working on this novel before approaching publishers? Was it difficult to find a publisher that suited the message you wanted to convey?

Literary fiction is always a hard sell, but I didn’t have much trouble getting publishers’ interest in Shiva’s Arms. The manuscript had placed in every contest I’d sent it to, so that was encouraging, and I worked on it for a few years before I submitted it to a publishing company.

The first publisher I sent it to accepted it, but the business folded before the ink was dry on my contract. The second publisher decided after accepting it that co-publishing was the way to go, but I didn’t agree. so that fell through. The third time was the charm.

What was the editing process like? How close is what we read today to your original story/vision?

My editor liked the power struggle between Alice and Amma and suggested that I make Alice’s story the focus. Earlier versions of the book spanned several generations of the Sambashivans and focused more on broader, more sociological themes. The story you read is more intimate, and I was able to transplant most of the good bits into it.

What made you decide to write your first novel, having specialised in poetry to date?

I’ve always written short stories as well as poetry. In fact, Shiva’s Arms began as a short story, so to develop it was an organic natural thing. I like to switch genres in my writing life – it’s my talisman against writer’s block, and the disciplines nourish one another.

Other than promoting this book release, what is the next project you are working on? Another novel/subject matter?

Yes, I’ve got a novel featuring Nela, and I’m making progress on a third. I guess I’ve got a little series going! I’m also working on another collection of stories, with quirky post- modern characters and an edgier sensibility.

Thanks Cheryl. I look forward to reading your next work published!