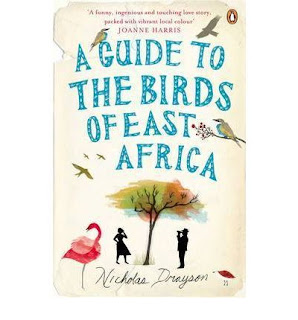 (Amazon),
A Guide to the Birds of East Africa

(Audible)
BOOK REVIEW: Do not be fooled by the title that sounds like a dusty reference tome, the fictional work A Guide to the Birds of East Africa by Nicholas Drayson is at its heart a charming old fashioned love story with depth and intelligence.

This novel has many special qualities but what captured my immediate interest was the conspiratorial narration style. The narrator themselves is somewhat of an enigma but what is evident is the narrating character’s respect and admiration for the story’s protagonist Mr Malik.

Malik is a shy and respectful widower living in Nairobi Kenya who has a secret crush on Rose Mbikwa. Rose, a widow of a Kenyan politician, leads an eclectic group of bird enthusiasts on bird walks each Tuesday. Malik is good to the core and devotes his time to helping others. He never misses a bird walk and is gathering up the courage to ask Rose to the most prestigious event on the Nairobi social calendar, the Nairobi Hunt Club Ball, when an old rival Harry Khan enters the scene. Harry Khan is everything Malik is not – bombastic, spendthrift and blatantly seeking the attention of Rose. Malik’s friends at the local social club organise a competition to see which of the men can identify the highest number of bird species in one week around Nairobi – the winner earning the right to invite Rose to the ball.

On the surface this story may seem light and fluffy but interwoven are surprisingly deep and intelligent flashbacks on the characters past experiences, exploring cultural diversities and their political beliefs. Kenyan and other African political systems corruption and the effect it has on culture is also explored.

In many respects this is your classic story of the well intentioned and lovable underdog that always ends up having to do things the hard way. But things are not always quite as they seem, this is the tortoise and the hare with a twist. Just as in life, you should always watch out for the quiet ones!

A Guide to the Birds of East Africa is a heart-warming story with depth and humour – a novel well worth reading.

The Author: Nicholas Drayson was born in England and has worked in a journalist in the United Kingdom, Kenya and Australia. Living in Australia since 1982 he has studied zoology and has a PhD in Australian natural history writing. His first novel, Confessing a Murder

This novel counts towards my participation in the Global Reading Challenge.

Have you read this novel too? What did you think of it?
Anyone read Drayson’s first novel Confessing a Murder?