In Anthem Ayn Rand crystalises her ideas of individualism and competition. This novel was first published in England in 1938. Read on for book quotes, links to other useful resources about Ayn Rand and my book review. 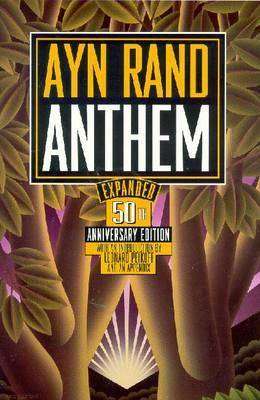 Since the Great Rebirth it has been a crime in his world to think or act as an individual. Even love is forbidden. Yet, since his childhood in the Home of the Infants, Equality 7-2521 has felt that he is different.

When he is sent by the Council of Vocations to work as a road sweeper, he stumbles upon a link to the old world that gives him the spur to break free.

While science fiction has not historically been one of my favourite genres, I am far better for having listened to this 2-hour audiobook, Anthem.

This novella’s title is apt because it presents what could be described as an anthem for individualism.

Ayn Rand’s novella is a moving exploration of the power of the words ‘we‘ and ‘I‘. It shows how taken to the extreme and on mass each of these words can evoke singlemindedness. Such single-mindedness can lead to oppression, and that can prove disastrous to mankind.

There is nothing to take a man’s freedom away from him, save other men.

Although this subject matter might sound high-brow, Rand’s skill is in that the prose is extremely accessible. Not one word is used unnecessarily. The simple and valuable message of Anthem is that the care for others must be carefully balanced with care for oneself. One cannot truly exist without the other.

Get your copy of Anthem from:

Detailed plot summary, character maps, quotes and other useful study materials for this novel are available at CourseHero.

“Centuries of chains and lashes will not kill the spirit of man nor the sense of truth within him.” ― Ayn Rand, Anthem #BookQuote

Ayn Rand, About the Author

Ayn Rand, born Alisa Zinov’yevna Rosenbaum (1905 – 1982), was a Russian-American novelist, philosopher, playwright, and screenwriter. Rand wrote Anthem in 1938, very early in her career. Ultimately she became best known for her two best-selling novels, The Fountainhead and Atlas Shrugged and for developing a philosophical system she called Objectivism.

Other reviews of Anthem

“This fine short novel is an excellent introduction to her passionate political philosophy and her emotional polemical style.” — Brothers Judd

“Anthem can be seen as a house of mirrors, a gallery in which brotherhood and equality, as they are understood in a free society, are parodied by the distorted image of “brotherhood” and “equality,” as they appear in a collectivist state. And Anthem is more than that. It is a gallery in which mirrors come alive, in which a society devoted to the repression of the self is finally confronted by an individual who manages to reflect upon himself.” —  The Altas Society